German MPs want Moscow back in G8, say peace in Europe possible only with Russia

The West should resume meaningful dialog with Moscow on all major international issues, and Russia should be invited to return to the G7, German opposition lawmakers say.

“If the West seriously intends to engage in a constructive dialog with Russia, it would be the right moment to do it now,” the head of the parliamentary faction of the Left Party, Sahra Wagenknecht, told DPA news agency. She added that the G7 group should once again become the G8.

Her appeal was supported by another opposition MP, Alexander Graf Lambsdorff, who is also a member of the federal executive committee of the Free Democratic Party (FDP). “It is reasonable to strengthen and to better organize a dialog with Russia,” he told DPA, adding that “a G7+1 would be the right format for that.”

The MPs also said that major international issues cannot be resolved without cooperation with Moscow, and urged Western leaders to invite Russian President Vladimir Putin to take part in the upcoming G7 summit in Canada.

“Russia should again be at the table during the [June] summit at the latest,” Wagenknecht said, adding that “peace in Europe as well as in the Middle East” is “possible” only if the West cooperates with Russia. The summit is expected to be held in the Canadian region of Charlevoix June 8 and 9.

The G7 is a forum of major industrialized nations – including the US, UK, France, Germany, Canada, Italy, and Japan – which meet annually to discuss pressing international issues. The EU is also represented at the meetings. Russia was part of the group for 12 years, during which it was called the G8. It became the G7 again in 2014, when Western nations accused Russia of meddling in the Ukrainian conflict and refused to visit the groups summit in Sochi.

The calls to bring Moscow back into the group came as G7 foreign ministers gathered in Toronto, Canada for a two-day meeting. The officials plan to discuss the conflicts in Syria and Ukraine, as well as North Koreas nuclear program and tensions surrounding the Iranian nuclear deal.

German Foreign Minister Heiko Maas, who also took part in the Toronto meeting, faces criticism at home over his plans to pursue a more hardline policy in relations with Russia. The ministers plans were particularly questioned by leading members of his own Social Democratic Party (SPD). 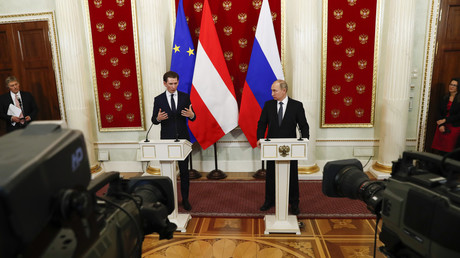 Interest in dialog with the Kremlin has not been expressed clearly enough by the new government, Manuela Schwesig, the prime minister of the German state of Mecklenburg-Western Pomerania, said. Stephan Weil, the prime minister of Lower Saxony, echoed the statement during a meeting of the SPD Federal Executive Committee on Sunday.

The Social Democrats have always believed that Germany should seek mutual “understanding” with Russia, and regularly send relevant “signals” to Moscow, according to Weil. The policy pursued by Maas only provokes “widespread irritation” within the party. The SPD politicians also warned that the political course chosen by the new foreign minister puts the partys foreign policy traditions at risk.

Weil particularly criticized an interview that Maas gave to Spiegel on April 16. In the interview, the foreign minister accused Moscow of becoming “an extremely difficult partner,” adding that it “has increasingly defined itself in distinction to, and partly in opposition to, the West.”

German President Frank-Walter Steinmeier recently warned against the demonization of Russia and its people. “Regardless of [President Vladimir] Putin, we cannot declare Russia as a whole, the country and its people, to be an enemy,” he said. “There is too much at stake.”

More than 90 percent of Germans want better relations with Russia, according to a recent poll conducted by the Forsa Institute on behalf of the Wiese Consult group. More than three-quarters of them also named US President Donald Trump as a greater threat to world peace than the Russian leader.

UN Jerusalem vote: US ‘will be taking names’