There can scarcely have been a more popular winner in recent MotoGP history and Petrucci had to battle his way through backslapping fans and rivals alike to reach a final, rapturous reception from his team in Parc Fermé.The 28-year-old recalled the experience recently to CNN. "It was so incredible," he smiled. "You have to go through all of the pit lane because Parc Fermé is at the end, and there was all the paddock waiting for me, just touching me. I felt really emotional."READ: The power behind Marc Marquez's MotoGP throneREAD: MotoE takes to the circuit just months after fire destroyed everything

For any MotoGP rider, let alone an Italian, there is simply no greater prize than a win on a Ducati at Mugello. This is the two-wheeled equivalent of a Ferrari victory at Monaco. As Fratelli d'Italia belted out over the podium ceremony, Petrucci dissolved into tears of joy and disbelief.But his triumph also has a fascinating backstory. At the post-race press conference, his voice choking with emotion, Petrucci dedicated the win to his teammate and fellow Italian, Andrea Dovizioso. "He adopted me this winter, like a child," Petrucci smiled as the post-race press conference roared with laughter. "Like a brother — a very, very big child; but this was unbelievable, a true teammate."Petrucci told CNN that he had reached a low point after the third race of the season, in Austin, and was beginning to think his future lay elsewhere. The self-deprecating Umbrian, in his first ever season for a factory team, knew things had to change.

"I'm in difficulties when I have to be an actor," he explained. "When things go wrong, you can read it on my face, and also when things go in a good way. But I always put myself in a team in the last position." It was this tendency to put himself last that, he realized, was a key weakness. It was Dovizioso who helped him understand why."I was thinking, I have to be clear about the reality. I'm not 20 years old, I can't say: 'Okay, I haven't won with Ducati, so maybe I'll have another chance with Yamaha or Honda.' My career from now, compared to many others here, is quite short," he said."Andrea talked to me. He said: 'You are very funny, you always say the truth; but sometimes saying the truth is not useful for you. You are not young anymore. If you continue thinking like this — that you are not capable of doing something, watching others like a target — you will not stay with Ducati next year.'"Dovizioso told CNN that he recognized something in his teammate. "He doesn't have the same experience as most of the riders in MotoGP, he came from a different championship, family, city — it's a different way to arrive in MotoGP," he explained. "He was really fast, with a good speed, but he couldn't keep the same speed for a whole season and in a lot of situations he didn't approach things in the right way."

The 33-year-old has been the closest challenger to Honda's prodigious Marc Marquez for the past three seasons and puts his success down to a change in focus, partly from working with renowned psychologist Amedeo Maffei. He said that the changes in his approach are "nothing special, small things," but is effusive about their impact. 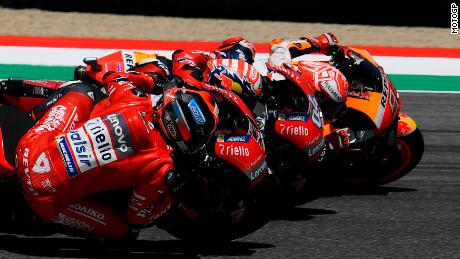 "You feel the effects, everywhere, everywhere. If you understand what is important for you, what is not important, you live in a better way, and you can transmit this to everybody."Dovizioso has had numerous teammates in his long career. "I've had a lot of experience with a lot of different riders, and you can see a lot of different ways to approach the same thing," he said. "And that affects a lot, for example, Marc (Marquez) is a big talent, a fast rider, blah blah blah, but one of his biggest advantages is his attitude — and that affects everything he is doing."

Petrucci says his teammate's guidance was all-encompassing. "Andrea gave a lot of advice to me but not simple advice, like 'taking a corner like this,' but just seeing how he lives; what is his feeling when he's worried about a race, when he's sad."I saw the human passion of Andrea and this helped me a lot. He helped me a lot to be a better person and a better rider, and the first thing is connected to the last."He was inspired to change. "From that point I said: 'I don't want to have regrets.' Maybe next year I'll work for my uncle and I'll think: 'F***, I haven't given my all in the last year,' and I didn't want to have regrets. So I just put everything in and from that point the results changed."Since Mugello, Petrucci has managed a podium at the Catalan GP as well as a creditable 4th in Germany — both ahead of his teammate.DovizioRead More – Source