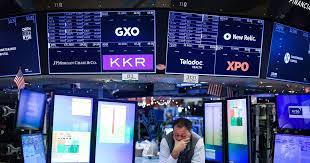 This session of the ‘3 witches’ ends with a rise of 0.63% on the Paris stock exchange, to 6995 points, thus signaling a gain of 8% since the beginning of the year. Over the past week, the CAC40 has nevertheless fallen by 0.4%, penalized by yesterday’s air pocket (-1.

000 redundancies, it is the turn of Google / Alhpabet to report 12,000 job cuts, or 5% of its workforce. These giants of ‘tech’ and online advertising are thus acting on an already noticeable slowdown in consumption which could worsen in the United States. 1.5%, below their May 2020 levels and even at their lowest since mid-2010: the impact of the rise in mortgage rates is being cruelly felt.

Over 1 year, resales of second-hand homes plunged -17.8%, at an annualized rate of 4.02 million, according to seasonally adjusted data from the National Association of Realtors. soon: yesterday, from Davos, several Federal Reserve and ECB officials sent the markets a message of firmness and determination in their fight against inflation, a warning heard by market participants one week before the meeting of the Fed. On the bond market, government bond yields deteriorated markedly with an American ten-year trending by +6.5Pts towards 3.4650%, our OATs deteriorated by +11Pts to 2.593%, the Bunds der +10Pts at 2.153%, Italian BTPs by +18Pts at 3.952%.

Orpea Announces The Termination of Its Negotiations

In corporate news, Orpea announces the termination of its negotiations between a consortium of third-party French investors led by Caisse des Dépôts et Consignations (CDC) and a group of unsecured financial creditors holding approximately 50% of its unsecured debt. EDF announces the success of a senior bond issue for a nominal amount of two billion euros and 950 million pounds sterling, an issue in four tranches with maturities ranging from nine to 30 years and coupons ranging from 4.25 to 5.625%.Boiron posted sales for the whole of 2022, up 17.4% to 534.2 million euros, including growth of 13, 6% at constant exchange rates (+9.4% in France and +26.1% internationally). Argan (-2.1% at 77E) publishes for the year 2022 a net recurring result (RNR) group share up 6%, to 118.9 million euros (i.e. 5.2 euros per share), representing 72% of rental income, which also increased by 6% , to 166 million.

Finally, GL Events posted one of the best rises in the SRD and rose by more than 7% in Paris, after the announcement of its results. In this context, Oddo maintains its outperformance rating on the share, with a price target raised from 20 to 23 euros.

This article is originally published on easybourse.com