Spokesman Zaw Htay confirmed the reports but wouldn't provide any further details, including whether the Nobel Laureate was there at the time of the attack.Suu Kyi was held under house arrest by Myanmar's former military regime at the home in Yangon, southern Myanmar, for 15 years. She was released in 2010.Myanmar's government is based in the country's capital of Naypyidaw, 370 kilometers (230 miles) north of the city.Zaw Htay posted a description of the firebombing suspect to his official Facebook page, a man aged about 40 years old with black hair. 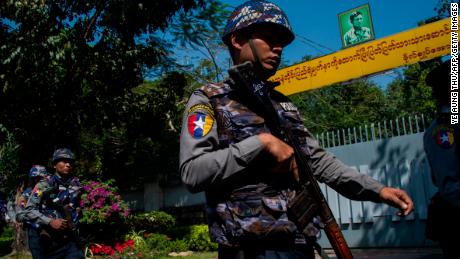 Wednesday marks two years since Suu Kyi's National League for Democracy party (NLD) took control of Myanmar's parliament after winning the 2015 elections, giving the country its first democratic government in decades.Myanmar's de-facto leader has since been the target of international condemnation over the alleged ethnic cleansing by her government of the country's Muslim minority Rohingya people.At least 680,000 Rohingya refugees have fled across the border into Bangladesh since August 2017, bringing with them stories of indiscriminate killings and destruction of property in the country's Western Rakhine State.Suu Kyi's government has strongly denied accusations it is deliberately targeting Rohingya civilians.