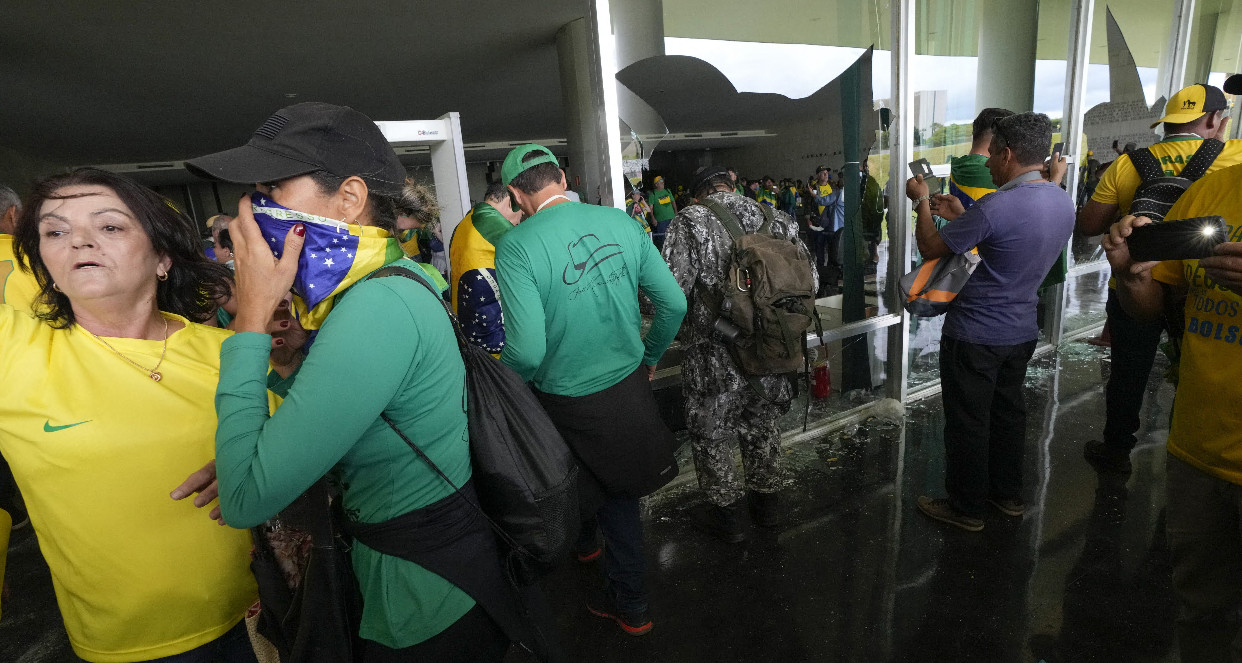 Hundreds of supporters of former Brazilian president Jair Bolsonaro violently stormed the Parliament in Brasilia managing to enter the outer space surrounding the Palace. Also stormed the Presidential Palace and the Supreme Court.

The chaos in the country stems from the failure to recognize Lula’s victory in the presidential election.

The assault recalls the one suffered by the US congress after Biden’s victory over Trump, whose second anniversary fell just two days ago.

Lula is Not in Brasilia, Emergency Meeting With Ministers

Brazilian President Luiz Inacio Lula da Silva is not in Brasilia right now. In fact, Lula went to the city of Araraquara, in the state of São Paulo, devastated by a flood, where he had gone to check the damage.

Lula is holding an emergency meeting with ministers from Araraquara, where he had gone to check the damage caused by the floods in the hinterland of São Paulo.

There is no shortage of episodes of devastation within the congress and some of the demonstrators occupied the assembly hall, climbing onto the benches and the bench of the presidency. Bolsonaro supporters brought sticks and stones. The use of pepper spray and stun bombs was not needed to disperse the crowd, which forced the police cordon and poured into the Congress building. The windows of the institutional headquarters were broken and the attackers occupied some rooms, including that of the plenary assembly.

The Assault of Bolsonaro Supporters

The broadcaster CNN Brasil shows people inside a building where vandalism has been committed. In one image we see an occupied and vandalized Senate chamber. A video shot by a protester shows the seat of Senator Jader Barbalho. Outside, a human tide with the shirt of the national football team. The same images are circulating on social media.

The police went into action firing tear gas. The area was guarded by the police but the Bolsonaristas, many of whom with the Carioca flag on their shoulders, managed to break through the security cordon and several dozen of them managed to climb a ramp of the building to occupy the roof . Bolsonaro’s supporters do not accept Lula’s victory in the last presidential elections and hundreds of them camped in front of the army headquarters in Brasilia the day after the October 30 elections. The demonstrators first forced the police cordon and then managed to break into the building.

The Brazilian military police have begun a blitz to disperse the demonstrators who attacked the headquarters of the institutions. O’Globo reports it. The military fires rubber bullets and stun grenades from helicopters to prevent other people from trying to approach the buildings of power.
All the windows on the first floor of the Senate have already been destroyed by the protesters who entered inside, adds O Globo. Some of the protesters have already reached the second floor. The military police are also using stun grenades in the presidential palace area. The protective bars of the Federal Supreme Court were torn down by protesters.

The minister: “Force will not prevail, reinforcements are arriving”
“This absurd attempt to impose the will by force will not prevail. The federal district government says there will be reinforcements. And the forces at our disposal are at work. I’m in the headquarters of the Ministry of Justice.’ Thus the Brazilian Minister of Justice, Flavio Dino, comments on his Twitter profile the assault on the institutional offices in Brasilia.

“Disorder is inconceivable and lack of respect for institutions is unacceptable. I have determined that all members of the Military Police and the Civil Police act firmly so that order is restored as a matter of urgency. Vandalism and looting will be fought with the rigor of the law”. Anderson Torres, secretary of public security of the federal district, former minister of justice and public security of the Bolsonaro government, writes it on twitter.

The former Brazilian president, Jair Bolsonaro, who never congratulated Lula on his victory in the presidential elections, left Brazil on December 30 to go to Florida and deserted the handover ceremony with Lula. There is no news of his return to his homeland or of his departure from the United States.

“My absolute condemnation of the assault on the democratic institutions of Brazil. Full support for President Lula Da Silva, democratically elected by millions of Brazilians through free and fair elections.” The President of the European Council Charles Michel writes it on Twitter.

“Horrified by the acts of violence and the illegal occupation of the government district in Brasilia by violent extremists today. Full support for President Lula and his government, Congress and the Federal Court. Brazilian democracy will prevail over violence and extremism.” The EU High Representative for Foreign Policy, Josep Borrell writes it in a tweet.

“Giorgia Meloni, an hour has passed since the assault by Bolsonaro’s followers on the Brazilian Parliament. She is the Prime Minister of Italy. What are you waiting for to express Italy’s condemnation of the assault and solidarity with President Lula?“. Gianni Cuperlo, from the Democratic Party, writes it on Twitter.

«A scene already seen, two years after the assault on Capitol Hill. Sovereignists when they lose react with contempt for democracy. Alongside Lula and the Brazilian institutions. The Government condemns without hesitation.” Thus on Twitter the democratic group leader in the Foreign Affairs Committee in the Chamber Enzo Amendola.

The US “Strongly” Condemns

The US “strongly” condemns the attack on institutions in Brazil by supporters of former President Jair Bolsonaro. “Violence has no place in a democracy. We strongly condemn the attacks on the executive, legislative and judiciary institutions in Brasilia, which are an attack on democracy. There is no justification for these acts!” said the US ambassador in Brasília, Douglas Koneff.

Lula Abroad at The End of January

Brazilian President Luiz Inàcio Lula da Silva will make his first official trip to Argentina at the end of January, before visiting the United States, Portugal and China. Lula, 77, will participate in the summit of the Community of Latin American and Caribbean States (CELAC), which will take place on January 23 and 24 in Buenos Aires. Then, the left-wing leader, who assumed the presidency of the South American country for the third time last Sunday, must meet his American counterpart, Joe Biden, in Washington, on a date not yet fixed. The trip to China, Brazil’s first trading partner, will be “after March”, while it will be in Portugal from 22 to 25 April. Lula, who has already governed twice, from 2003 to 2010, the country of continental dimensions and largest economy in Latin America, is giving the first signs of wanting to break the “international isolation” of Brazil during the four years of his far-right predecessor, Jair Bolsonaro.

In his inaugural speech to Congress, the President announced a new role for Brazil in the world, taking up «South American integration» and rebuilding «high-level and active dialogue with the United States, the European Community and China».
The new foreign minister, Mauro Vieira, said at the inauguration ceremony that Brazil will have “an enormous reconstruction work” after an “unprecedented setback”.

This article is originally published on metronews.it